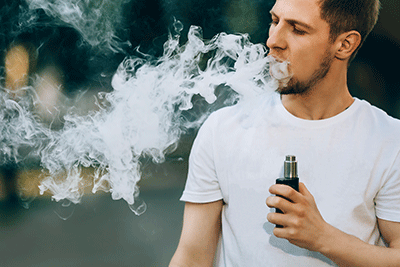 Passive Smoking Vs Passive Vaping – Are They Similar?

As the years go by, the popularity of vaping using e-cigarettes continues to increase as a cessation tool.
Vapers know the benefits, as do medical professionals who promote it as a replacement for cigarettes. But the same can not be said of the general public.
Can you blame them as they get even bigger clouds of vapour in their face on occasion when etiquette is not maintained?

The Dangers Of Passive Smoking

When you smoke tobacco, you only inhale a small portion of the smoke that is produced.
The remaining smoke is dispersed into your immediate vicinity – slowly wafting away depending on which way the wind is blowing.
Should anybody happen to be near you, they will then inhale any surplus smoke and at the same time, unsolicitedly and unknowingly – potentially damage their health.
Passive smoking is one of the main contributing causes to the risk of coronary disease in non-smokers.

Every time a cigarette is lit, tens of thousands of toxic carcinogens, carbon monoxide and tar are released into the air.
With 16% of all deaths in the UK annually attributed to smoking-related diseases, those who are subjected to second-hand smoke regularly run the risk of getting the same diseases as smokers, such as heart disease and lung cancer.

While smokers might think that it’s okay to smoke in the car with the windows down and the kids in the back, this is, of course, a big no-no and as of 2015 was made illegal to smoke in a private vehicle if someone under 18 is present.
Children exposed to cigarette smoke regularly have a higher risk of developing coughs, colds, allergies, asthma, and breathing problems and even before kids get to be kids, pregnant women subject to passive smoking may be at risk of premature birth and low birth weight.

Second Hand Vape – Is This A Problem?

In 2015, Public Health England published independent evidence that showed e-cigarettes to be up to an incredible 95% less harmful than conventional tobacco products.
E-cigarettes are designed to heat and not burn e-liquid, which means that there is no carcinogenic smoke produced – just vapour.

Due to the nature of e-cigarettes and how new they are to the market, the long-term health risks and implications are still being researched and studied.
However, because of the distinct lack of smoke produced, the many health risks that are commonly associated with passive smoking will be significantly reduced.
The vapour from an e-cig will contain negligible amounts of nicotine, but because the e-liquid has not combusted to produce any smoke, there will be none of the noxious tar and carbon monoxide pumped into the air, which is known to wreak havoc with our long-term health.

If you’re having cough issues when using a vape mod or pod, you may want to revise your own set up i.e your nicotine strength or vaping technique used.

While vapour from an e-cig will evaporate fairly quickly, and the potential health risks are reduced, we would still suggest that you avoid vaping around pregnant women, babies and children.
If you are at home or a friend’s house, use some good old regular e-cig etiquette and ask if anybody minds if you vape.
Just because it might be safer, doesn’t mean everyone wants to be surrounded by your flavoured exhaled vapour cloud.

Now that we’ve understood the difference between second-hand smoke and second-hand vaping, did you know that smoking tobacco cigarettes produces third-hand smoke as well?
If you smoke indoors or in the car, once you’ve lit and finished your cigarette, the stale smoke will loom and linger for anywhere between 15 – 25 minutes.
But what has happened to that smoke?

While some smoke may have escaped through an open window or door, once any remaining visible smoke has ceased to be, you could be forgiven for thinking that your surroundings are bright and breezy again.
Alas, this is not true.
As well as the white ash residue that smoke will leave in its most visible state, the sticky brown tar and heavy carbon monoxide are the pesky little ones that will take it upon themselves to stay put and gradually increase their footprint, in what was your fortress.

Easily absorbed into fabrics of your clothes, furniture, walls and ceilings too, third-hand smoke is almost invisible and will get everywhere.
With time, continued smoking will make your immediate surroundings become the same colour – a murky tan hue that will also hum like the smell of an ashtray.

Love your furry friends? If you own pets and smoke in the house, this will mean that they too are prone to both second-hand and third-hand smoke.
Giving up smoking is the first step as the chemicals can still stay in the furniture and carpets that they will touch constantly.
While vaping is safer, it’s advised if you need to exhale to do so outdoors away from your pets. Have the same respect for them as you should for humans.

When it comes to who wins the contest of health between passive smoking and passive vaping, while neither can be found to be completely risk-free – passive vapour has significantly lower levels of damage in the atmosphere compared to second and lingering third-hand smoke.

If you’re a smoker or know a smoker, reduce the potential harm to your body and those close to you – managing your nicotine addiction by switching to vaping.
Uncomplicated and considerably cheaper than smoking – e-cigarettes heat nicotine-based, flavoured e-liquid, which will provide a hit of nicotine similar to what you might experience when you smoke.

The array of vaping products that exist can seem dizzying, however, all you need to get started is a simple e-cig starter kit. Your kit will contain all you need to start vaping straight away including a rechargeable e-cig battery, USB charger and your choice of flavoured e-liquid in a range of nicotine strengths, which you can match to the relevant strength you may be used to.

Reduce the risk of harm to yourself and others by quitting smoking and switching to vaping.