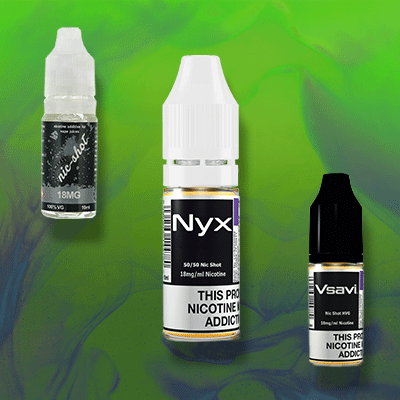 Nic Shot Guide – Which Should I Use?

Before 2016, nobody had heard of a ‘nic shot’ or even needed one for vaping. That’s because you could buy large bottles of e-liquid already containing nicotine mixed to add to your vape mod or pod. However, that all changed when TPD regulations stipulated that only bottles of 10ml e-liquid containing nicotine could be sold to vaping customers in the EU. To keep up with industry demand for larger bottles of e-liquid, shortfills and ‘nic shots’ were born.

Let’s check out how they’re made, how much you will need in a shortfill bottle and whether they’re now the most popular source of nicotine for vapers.

What Is A Nic Shot?

A nic shot is a 10ml bottle of pure nicotine created to meet Tobacco Product Directive (TPD) regulations. Because vapers still require large amounts of nicotine daily in some cases, you can get a 60ml shortfill bottle (only filled with 50ml vape juice) and add a 10ml nic shot to the gap in your shortfill.

Typically unflavoured and carefully created by extracting nicotine from the tobacco plant, nic shots are available in a variety of ratios produced with Vegetable Glycerin or Propylene Glycol, which both act as carriers.
Both of these compounds are used in food production, diluted and completely safe. You can also get nicotine in a variety of forms, depending on how they’re extracted.
Examples include freebase nicotine which is the most typical extraction used in vaping.
More recently, we have seen the emergence of nic salts, which you can now find in nic shots too. You can read further about freebase and nic salt nicotine here.
So now you know what a nic shot is, let’s explain shortfills, which are increasingly popular with vapers of all levels.

A shortfill is a nicotine bottle of vape juice containing only VG, PG, sweeteners and no nicotine whatsoever.
Because of this, it sidesteps the EU rule of only purchasing 10ml e-liquids containing nicotine.
Instead, you can buy your 50ml bottles of shortfill and mix yourself.
For a greater in-depth look into why shortfills were created and how to mix them once you add a nic shot, read here.

Since 2003 we have seen the rapid rise of e-cigarettes and people switching from smoking to vaping.
And who can blame them? You increase your chances of a better life by reducing the health risks linked with smoking.
Ideally, vapers want to drop their nicotine levels at a slower pace, having greater control over the addiction to nicotine and eventually stopping when the time is right.
This was not possible at all with smoking cigarettes – with people often hooked from a young age and unable to stop inhaling thousands of dangerous toxins.
Vaping showed glimpses of what it could do to help people early on, allowing millions to quit smoking. But the 2016 TPD regulations on vaping temporarily changed that.
However, thanks to the introduction of shortfills and nic shots, slowly but surely vapers are regaining control of their journey to reduce nicotine.
The temptation to go back to smoking reduces when you can conveniently top up with the required amount of e-liquid containing nicotine with larger bottle size.

Which Nic Shot Should I Use And Why?

Now you simply have to pick which type of nicotine is best and which type of VG/PG ratio is better for your device and technique.
Is it a stronger flavour, cloud production or throat hit you’re after? Nic shots can mildly vary on all counts based on the amount of PG or VG in the nic shot.
For example, a 100% VG nic shot would be a fantastic choice for voluminous clouds of large vapour due to the thickness of the pure nicotine.
Typically most shortfill bottles are 70:30 VG to PG ratio, but you can find some 100% VG shortfills too.

Higher VG shortfills and nic shots tend to suit advanced vapers more using a direct to lung technique.
This is because they can increase flavour and cloud production. However, be careful because you tend to vape more e-liquid, which leads to a larger amount of nicotine inhaled.
Too much can be harsh on the throat, so it’s all about calculating the right balance with your nic shot and shortfill.

Alternatively, you can opt for a 50/50 nic shot which neither favours PG and VG preference, instead offering the best of both.
Who can say no to a delicate mix of throat hit and cloud production?

Because the type of nicotine you select is important, which as we mentioned earlier is freebase or nic salt-based, the little differences between the two highlight what kind of vaper you are.
With nic salt nic shots, you get much faster delivery of nicotine for instance.
Below are some further advantages to using nic shots and a key difference between vaping shortfills and freebase 10ml e-liquids. 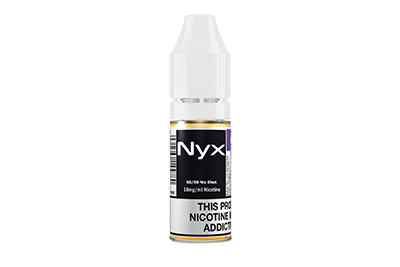 It’s a bit of a trick question, as we explained above you can get nicotine shots made with salt nicotine.
However, the confusion occurs as 10ml pre-mixed e-liquids called nic salts already contain 10mg or 20mg of salt nicotine.
Nic shots on the other hand would be added to a 50ml bottle of shortfill.
Nic salts (the pre-mixed variety) are ideal for beginner vapers who have recently switched from smoking and seek a smoother throat hit.
They’re simplified for vapers who do not need or want to mix vape juice with nicotine, working out nicotine ratios while still getting the higher absorption of nicotine to the bloodstream, thanks to benzoic acid.
In comparison, nic shots suit advanced vapers who prefer to create their mix by calculating the right levels of nicotine.

At Pure E-Liquids, we stock a range of nic shots for all types of vaping.
Nic shots are just what’s needed to get the right measurement in your e-liquid, slowly tapering down the amount per inhale.
It’s important to remember that unless you have an allergy to PG, which can occur, that you don’t necessarily need a certain ratio in your nic shot to match your shortfill.
Nevertheless, it’s always nice to blend both perfectly by keeping to the same mixture of compounds. If you need any further help after reading our nic shot guide, we are happy to help.