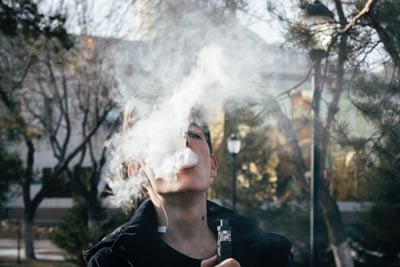 With the scope of the vaping community continuing to grow, vapers are finding new ways and preferred styles vaping. Whether that’s the trend of developing new flavoured juices, a selection of ground-breaking firmware, or increasingly powerful coils, brands like Innokin are paving the way for a new subculture of vaping that will see the number of vapers worldwide growing to around 55 million by 2021.

As more and more people turn to vapes as a substitute to tobacco based cigarettes, the market for new products has significantly increased. The growth of the vaping community alongside the rise and prominence of social media in our lives has led to a duality of online vapers sharing viral content and garnering a huge following on the likes of Youtube and Instagram. This is often through the production of video reviews featuring popular vape products or through creating amazing videos of vapour creativity, while creators blow smoke in all different ways and strive to create the biggest vapour clouds possible.

This guide will explore how to get the most from your vapes, and how to alter your vape to ensure that you’re getting the biggest clouds possible. So, settle in, relax and read on to find out more about how the innokin proton went on to produce the biggest clouds in the vaping community. It’s all coils and Ohms.

Innokin are a prominent vaping company founded in 2011, combining cutting edge technology and quality aesthetic to provide the most advanced e-cigarettes on the market. Innokin allows its loyal following access to a selection of flavoured liquids as well as some amazing modification kits to transform the power of your vape and allow you to exhale some of the biggest clouds in the vaping industry.

In addition to the primary Innokin brand, they also work, design and develop a selection of other vaping brands such as iTaste, iClear, CoolFire, iSub, Gladius, Lily, as well as the recently released Innokincell. The growth of the Innokin name and products has truly became a common fixture among the community with the Innokin name being sold in around 5000 stores across the United States.

When using the e cigarettes designed and developed by Innokin you can guarantee that you’re using nothing but the best products incorporated with the latest vape technology. The products created by Innokin are designed with economic and environmental features in mind to ensure as little damage to the environment as possible, while reducing inefficiencies and wastage in relation to the vape liquids.

The Innokin brand has grown significantly over the past 8 years, now possessing over 70 patents that truly establish the brand as one of the most significant and leading names in the vaping world and e-cigarette markets across the planet.

What is the Innokin Proton Kit?

The Innokin Proton is a 235 watt performance box mod, kitted out with a high resolution screen capable of showing up to six colours. The Proton is a cutting edge piece of vaping equipment and features many innovations that come as patented firsts within the vaping world. Rather than reinvent the wheel and bring minor updates on former products produced by Innokin they decided to completely revitalise the proton kit and develop each and every component to ensure that it was offering something new, delivering both technological and stylistic updates.

One of the main features that’s been added to the proton kit is the joy stick style selector which is the first of its kind among the vaping world, creating the opportunity for owners to easily switch between wattages and power to enable them to produce larger or smaller vape clouds. The movement of the joy stick will also be correlated alongside the screen which will show your current wattage so you’re always aware of how much you’re vaping.

It’s not only in the aesthetic where the Innokin Proton paves new pathways for the possibilities of what a vape can be, one of the latest features of the device is the new SCION II coil featuring a sliding top cap and a design that allows for increased durability, efficiency and a higher ohm wattage while vaping. The Innokin plexus coil is complete with a KAL panel of aligned holes that allow for durability and mean that constant maintenance is not required because of the durability within the device.

It couldn’t be simpler to operate the Innokin proton device and this is accentuated by the innovative design created by the Innokin team. The free motion joy stick coupled with the 1.5 inch digital screen creates easy-to-use functionality that is simply not achieved with other vaping products. While also possessing simple instructions to allow you to quickly change liquids and coils for your own personal bespoke use.

How to make the Innokin Proton have bigger clouds?

There’s a few different methods of blowing big clouds with your Innokin Proton and this section of the guide will hopefully offer some informative advice to get you cloud chasing vapers exhaling some of the biggest clouds in your community. The key to creating bigger clouds is all in the wattage of your device and by applying certain modifiers or firmware updates to your vape that increase the vapour excretion. Larger clouds are possible when the vape liquid burns at a higher temperature, the commonality of blowing large clouds is often known as sub-ohming. But what is sub-ohming and how can you improve your vaping experience because of it. Let’s take a look.

Sub-ohm vaping or sub-ohming as its commonly known has become a sort after trend within the vaping community with your reputation and notoriety resting on how big your vape clouds can be. The ideas and benefits of sub-ohming are multi-faceted but the real reason behind sub-ohming is in the ability to create large, flavour rich vape clouds and improve your vaping experience.

The trend began with vapers simply trying to supe up their vapes by improving the amp capacity within the battery, but there was only so much that a small battery could take, and it lead to many health and safety concerns caused by exploding vapes in pockets and even while in use. Recent developments have meant that rather than improving the power of the batteries within the vape, the key to larger clouds is through the resistance within the coil. This resistance is achieved through increasing the ohms within the coil, thus allowing bigger and more richer clouds of smoke to be produced.

Most vapes have a standard ohm resistance of between 1.5 and 3 ohms while sub-ohm vaping requires a resistance of less than 1 ohm. There are some safety concerns related to overheating batteries because of heightened temperatures so it’s important that you’re vigilant in ensuring your safety while sub-ohm vaping. To blow bigger clouds with the Innokin Proton it’s simply a case of replacing the coils to offer less resistance or simply upping the wattage within the standard function of your device.

Although it may seem like a simple means of producing big clouds of vape smoke, there’s actually quite a lot of science behind this new vaping trend. Firstly though, lets look at the ohm. What exactly is an ohm and how does it relate to vaping? The Ohm is a symbol of electrical resistance discovered by the German physicist George Simon Ohm in the 19th century. The Ohm can be defined as the point of electrical resistance between two different conductors. In the case of the vape, this is between the battery and the vape fluid.

When you’re purchasing your new Innokin Proton vape you may be greeted with the Ohm symbol when looking through the item specifics. It’s this symbol that you need to look out for if you’re looking to produce those big vape clouds. The slightly horseshoe looking symbol is based on the common Omega symbol because of its similar sounding name. The less resistance that the coil of the vape can produce, the higher temperatures that the vape can achieve, thus heightening the temperature of the liquid and allowing deeper more cloudlike flumes to be produced. When experimenting with sub-ohming its always important to operate safely and gain a good understand of how your vape works before messing about with its components or upgrading the firmware.

The Rise of Vaping

Now more than ever the health risks associated with smoking cigarettes are beginning to deter smokers with many opting to choose a vape as a new way of getting their nicotine fix. Although deemed as the healthier option in comparison to standard cigarettes the health benefits or potential harm of vapes is still yet to be proven with many vape brands investing a lot of research into the medical effects that vaping has on the body.

According to statistics from the BBC the amount of vapers worldwide is set to grow significantly over the next couple of years to around 55 million, however this is still a far cry from the amount of cigerette smokers worldwide which remains at 1 billion globally, although it is slowly on the decline.

In addition to the increase in vaping for health reasons many people are simply drawn into the vaping community because of their curiosity for the new fangled technology and the rich range of flavours that are available within your vape. Additionally, many establishment’s allow you to smoke your e-cigarettes while indoors which means you no longer have to spend hours out in the cold smoking your cigarettes. The advantages of vaping are endless, even if the rumours surrounding the health issues associated with vaping remain unclear.

Are there any negative effects of Sub Ohm vaping?

So far, there’s been no defining examples that have shined light on any negative effects that sub-ohm vaping has for its users. While the physical act of sub-ohming is no different to standard vaping techniques, the only issues seem to result when it comes to the overheating of your vape. However, this overheating is often caused by inadequate and incapable devices that don’t have the capacity to handle the resistance or wattage that you’re attempting to put them through.

However, the chance of overheating or even worse, explosion, is significantly reduced when you consider the quality and innovation that’s incorporated into Innokin’s products, especially within the Proton kit. The Innokin Proton’s modern technology means that the device is well equip to deal with the new trend of sub-ohming as well as any other potential technological changes that may occur, providing transferable firmware upgrades when necessary.

Further statistics from the BBC also suggest that more and more people are choosing to purchase their vape equipment online while also spending more in the process on new modifications and rarer flavoured liquids. There seems to be a whole other market generated on the back of vaping and all their adds on in comparison to the standard use of cigarettes. Who knows where the industry will move to next on the back of their recent digitalisation?

Hopefully by now you’ve gained a better understanding of the best methods to take when looking to create the biggest vape clouds possible on your Innokin Proton Kit. Always remember that increasing the size of your vape clouds is about reducing the resistance and everything to do with the ohm value. The higher temperatures that you can achieve with your vape, the larger, richer flavours that are possible for your vape clouds.

Innokin are one of the leading brands within the vaping industry and are at the pinnacle of the industry for good reason. Constantly providing innovative technology, new patents and vapes that really transform the industry, you should never look past the quality craftsmanship, design, and vaping experience that will be delivered with the Inkkotin Proton.